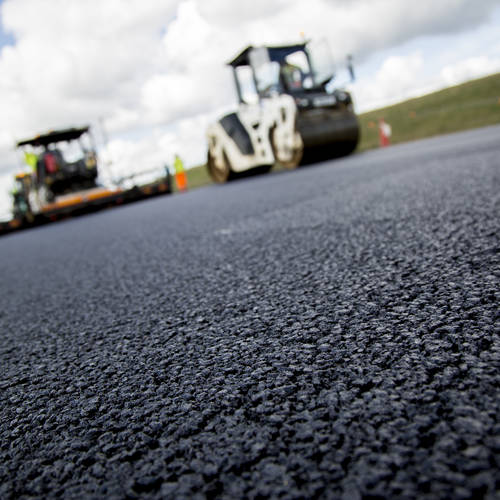 Tarmac were approached by LCC after it was discovered that carriageway edging on four stretches of different roads in the Melton Mowbray area were failing and required reconstruction. Hazardous levels of tar were found in the surface material which meant that over 4,000 tonnes of road arisings had to be removed and replaced. To dispose of 4,000 tonnes of tar bound planings would have cost Leicestershire County Council £120 per tonne or £480,000, so this was a major cost saving.

In addition to this the nearest disposal site would have been 154 miles away and would have required 200 lorry movements to drop off all of the obsolete material.

Tarmac’s focus was to recommend a solution that delivered sustainable performance and cost savings to the client. As a result ULTIFOAM was put forward for its environmentally friendly credentials as an alternative to hot asphalt materials, it combined proven foamed bitumen technology with cold production and paving.

A mobile plant was subsequently erected where the tar bound planings could be sent for re-processing. They were then sent back out to site and re-used in the haunch of the roads before being re-laid with conventional material. This offered a significant sustainability and cost benefit to the client.

The ULTIFOAM site was situated a mere 20 miles from the works site, meaning that 26,800 miles were saved reducing time, cost and carbon savings in relation to the project.

Additional cost saving were made by using recycled planings, instead of purchasing 4k tonnes of dense bound macadam (DBM) that would otherwise have been required.