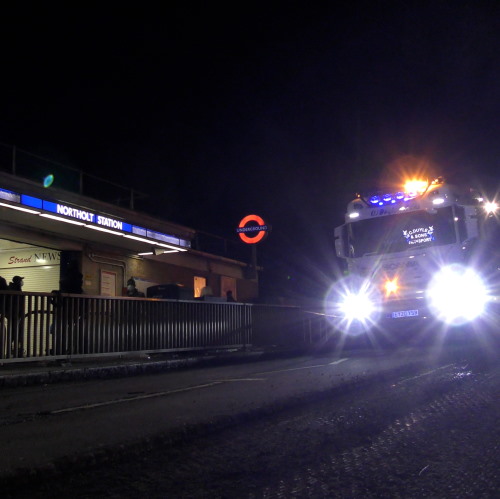 Mandeville Road is a busy A-road servicing the London Underground Station at Northolt. It is a major route linking the A40 to Harrow.

The site comprises two dual carriageways which traverse a London Underground bridge over the railway line. Each approach is on a gradient with a pedestrian crossing on the brow of the hill directly outside the station.

The original design for the work was for a conventional build of 70mm of binder course and 40mm of surface course. However, cores taken from over the bridge showed that this design was not suitable. The cores revealed hazardous, tar bound materials and a maximum planing depth of 80mm. London Borough of Ealing came to Tarmac for a solution.

ULTILAYER SMA 14 was selected using a steel slag aggregate. Materials where produced warm to allow quicker trafficking and reduced CO2 emissions at manufacture. The location of the site and the extent of the works necessitated road closures – Shift 1 Northbound, Shift 2 Southbound and it was critical to reopen the road in time for the morning rush hour.

Given that the material was to be laid at 80mm in a single layer Tarmac advised that the ULTILAYER should be supplied in a warm mix (typically 40°C lower than conventional) so that the new asphalt would cool more quickly, allowing the white lines to be applied at <60°C and the road reopened at <40°C by the hand-back time.

London Borough of Ealing has previously used ULTILAYER in high stress, high volume sites but this was the first time it had been used as a deep inlay, single layer.

The original programme allowed for 4 shifts (1 x binder, 1 x surface for each carriageway). Use of the single layer solution enabled the contractors to complete the scheme in just 2 shifts saving both time and money and halving the disruption to residents and bus services due to the road closure.

The change to a single layer at 80mm rather than a two-layer system at 110mm saved the client approximately 220t of material. In addition, the steel slag aggregate, which is sourced from Tarmac’s facility at the steel works in Port Talbot, South Wales and transferred to London by rail, is zero CO2 rated. There was also a 10% saving through reduced energy usage at the plant and associated CO2 emissions gained by utilising a warm mix asphalt with no compromise to the material’s performance.

Tarmac supplied a superior product with excellent sustainability qualities in a design which halved the programme duration and saved the client both time and money.

ULTILAYER offers improved ride quality, drainage and appearance of the road surface. The use of WARM MIX asphalt reduced air pollution by cutting CO2 emissions and enabled a quick return to service for all road users.

‘This scheme wouldn’t have happened without funding from TfL and London Borough of Ealing are grateful to them for providing the finance in the first place. It was beset with many challenges; the discovery of tar, heavy traffic volumes, permissions to work above structures and the difficulties of effective traffic management close to the A40 but Ealing Highways met all the challenges and have now delivered a complex scheme within a very short window of time.

Once coring was received, Ealing Highways knew that guidance should be followed, and the contaminant left in situ. This led to investigating a new approach and once confirmed as affordable, a decision was made to proceed.

Ealing Highways are expecting the new surface will cope with the demands of relentless traffic and although we will monitor the site in future, we are confident the right choice was made for the following reasons;