Sustainability the first port of call for Immingham upgrade

The Port of Immingham is the UK’s busiest port by tonnage, handling up to 55 million tonnes of goods every year. The A160 is a vital strategic 5km route for the 40,000 vehicles that travel to and from the port each day.

Tasked with conducting a full carriageway regeneration which included upgrading the route to a dual carriageway, Tarmac and partners Costain and Jacobs worked collaboratively over a two-year period prior to work commencing on site to value engineer the pavement design.

The project team explored using pioneering sustainable methods that would both boost productivity and minimise the project’s impact on the environment and disruption to road users.

Following a series of core samples being taken and analysed, 2,800 tonnes of tar bound asphalt was identified in the existing road – a hazardous waste material containing pollutants that can pose health risks to contractor teams and the surrounding environment.

To safely dispose of the material, Tarmac suggested recycling the materials into designs for the pavement’s lower layers by encapsulating it in a Cement Bound Granular Mixture (CBGM) sub-base mix. It also proposed incorporating 30,000 tonnes of secondary aggregates into the road’s base layer, including recycled by-products from other industries such as blast furnace slag and steel slag.

Approaching the project in this way generated zero waste to landfill and resulted in over 2,900 fewer HGV movements being needed. With the disposal costs for a tonne of tar bound material around £140, it additionally meant that reusing the tar bound planings delivered savings of approximately £392,000.

For the surface course, over 70,000 tonnes of Tarmac’s low-temperature asphalt Ultilow were laid, 90 per cent of which was manufactured using secondary aggregates.

Mixed at circa 40°C lower than the 170°C to 190°C of regular hot asphalt, these lower temperatures are achieved by modifying the behaviour of the bitumen either through foaming or using a warm mix additive during manufacturing.

This saved around 204 tonnes of carbon dioxide compared to a project using traditional materials and reduced the material production carbon emissions by nine per cent.

The faster cooling times of Ultilow also increased the volume of material laid during each shift by 20 per cent, allowing works to be completed in fewer shifts – thereby reducing disruption for road users.

The whole approach to upgrading the A160 at the Port of Immingham was designed with sustainability in mind and was successfully delivered having contributed significant productivity savings.

Engagement across the supply chain at an early stage ensured that materials were optimised to achieve the highest quality finish while diverting waste from landfill and minimising carbon emissions.

The upgrades will ensure that this vital strategic road has the capacity and durability to cope with high volumes of traffic in the long term, setting a precedent for the design of future schemes. 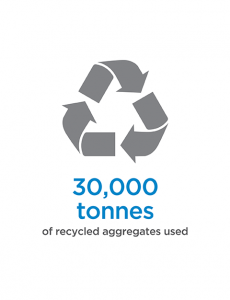 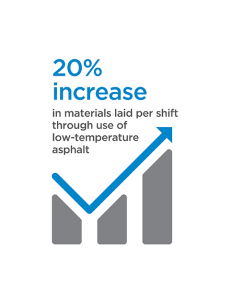