Fossilised plants which date back millions of years have been preserved after Tarmac moved them from a public footpath to avoid them being destroyed under foot.

The ancient plants, predominantly ferns, were relocated from a path around Bayston Hill – a scenic beauty spot near Shrewsbury, in Shropshire. The fossilised ferns were at risk of being trampled by the number of walkers enjoying the area.

Jack Brookes, assistant works manager at Tarmac’s Bayston Hill Quarry, said: “The sheer volume of footfall meant these ferns were in danger of being trampled. Quite a few walkers identified them as worthy of being saved so we moved them away from the path and created a small area where they are safe from pedestrian traffic.”

Now, leading experts are keen to ensure the fossilised ferns, although not rare, are preserved.

Dr Thomas Clements, a palaeontologist at the University of Birmingham, investigating how fossils form and how soft-tissues fossilise – known as the science of taphonomy – explains that ferns can be fascinating plants.

“Ferns are a really lovely group of vascular plants that don’t have seeds or flowers and use spores to reproduce,” he said. “They are a very ancient group of plants, having been around for more than 360 million years, making them much much older than the dinosaurs!

“They are quite common today, especially in low-light and damp areas like woods or on the moors – in fact, I have one on my balcony!

“Fossils, in general, are quite common in some rocks, and ferns are not uncommon because they are quite tough plants. However, they are mostly fragmented – finding a complete fern is quite rare. They are frequently found in rocks from the Carboniferous period (around 300 million years ago), which is the age of many of the rocks of the Bayston Hill area, I believe.”

“Fossils are important because they tell a lot about the past – what the environment was like, what type of animals and plants lived back then, and how these organisms evolved.

“They are our window on the ancient past and palaeontologists can determine a huge amount of information from the smallest fossils! They are also really fascinating cultural objects that people enjoy seeing and learning about!”

Ian Knott, works manager at Bayston Hill Quarry, said: “We were worried that the ferns were going to be destroyed by the many walkers around the area so we diverted the footpath and erected some screening around them, creating a specific area where they are still visible to interested walkers but can’t be damaged.

“We weren’t sure of their significance but know that they are quite an attraction and popular locally. They’ve obviously been around for a very long time and now they can be preserved for a bit longer.”

Dr Clements welcomed Tarmac’s efforts to protect the ferns at Bayston Hill and urged walkers to be wary of where they tread, adding: “If the public ever come across a fossil they think is important, they should leave it where they find it, make a note of the specific area, and contact their local museum, university geology department or the British Geological Survey.

“These institutions can normally assist and give the best advice on how to protect the fossil. You never know, you might have even discovered a new species and get to come up with a name for it!”

Pictures: Top – Ian Knott, works manager at Bayston Hill Quarry, at the site where fossilised fern trees have been preserved following their discovery at the Tarmac quarry. Inset – remarkable detail of the fossilised trunks of the ferns, which could date back millions of years. 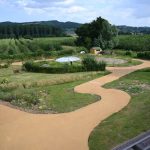 Tarmac introduces youngsters to the varied world of construction 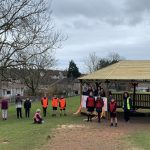 Outdoors brought to the classroom thanks to Tarmac