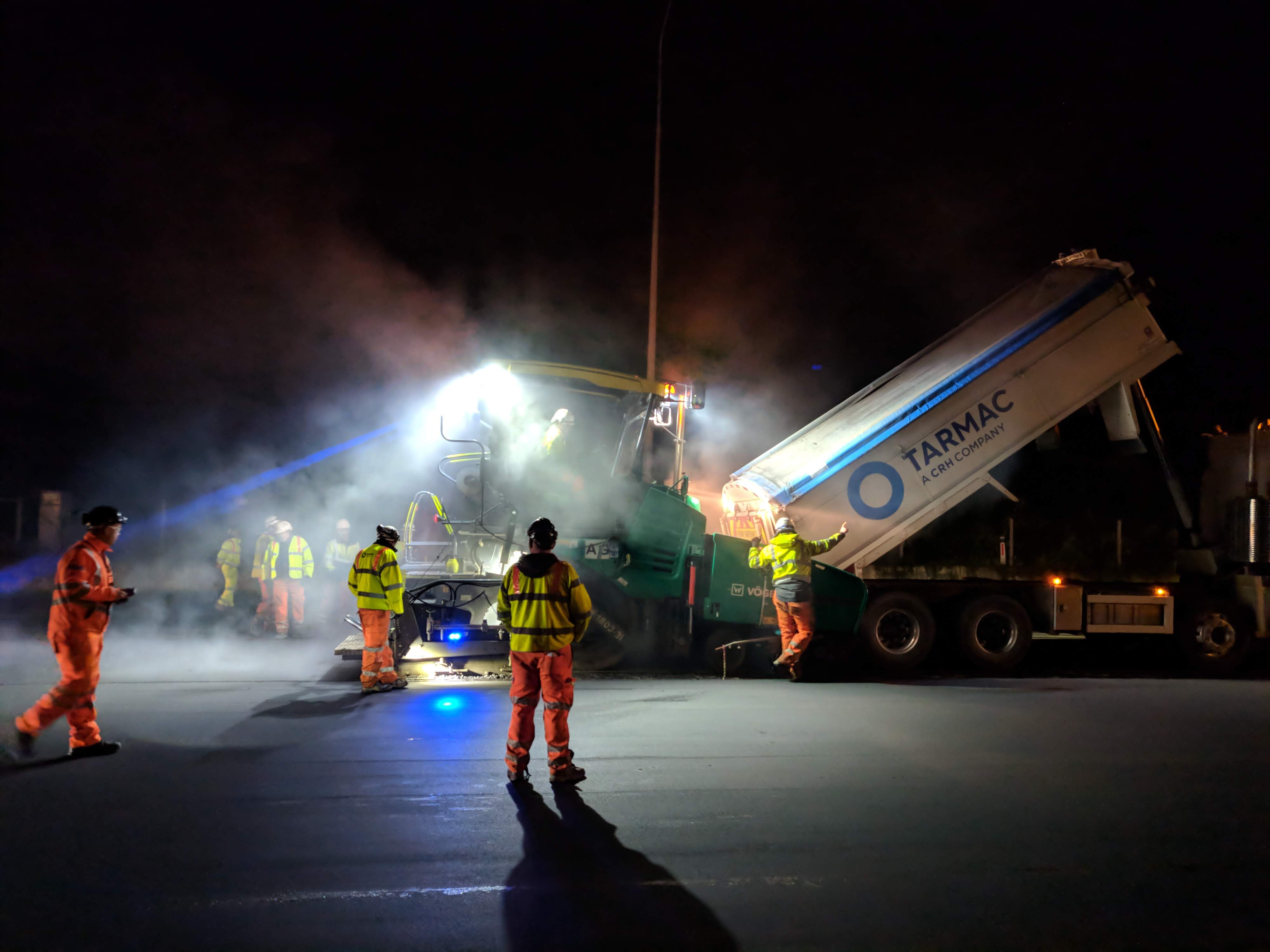 Within these junctions of the M25 there is 13km of concrete road that has been overlaid with a thin asphalt surface course which varies from 30-50mm in depth.

The section was also asymmetrically widened in 2012 which has led to misalignment between bays and lanes.

Overlaid concrete is a key issue for the M25. Movement from the concrete bays reflectively cracks through to the surface of the pavement – and if left untreated can cause early failure of the asphalt surface. Where these cracks fall in the wheel paths; failure is further accelerated.

Following workshops with the M25 Community and our supply chain. A dual solution and working methodology was developed for 90% of the works this solution took advantage of using full junction-to-junction closures to allow both working activities to safely take place within the same closure.

Another benefit of full closures was to allow a team of experts from the M25 Community to walk the site before any works took place, giving a much greater understanding of the works required than would be possible to gain through the traditional desktop analysis and long stops.

The solution involved two processes – rout and seal, and re-surfacing.

Rout & Seal The rout and seal proposed was an extensive treatment of any visible concrete joints through the existing asphalt in the following three steps:

1. Using a specially modified planer drum, 160mm wide to rout through the existing surfacing and a minimum depth of 40mm into the concrete below.

2. Paint the routed section with quick drying primer and PSB to ensure that it is fully waterproofed, to prevent the possibility for future water ingress problems occurring

3. Install the Permatrack material in two layers into the prepared routed area.

The purpose of this extensive treatment was to limit impact of movement along the bay joints, which previously only had limited treatments.

Re-Surfacing Bond coat with additional additive (used to improve the bond between the concrete and the new surfacing and reduce pick-up on truck tyres) was sprayed at .7l/m prior to laying Ultiflex (Polymer modified to give improved flexibility) 14mm or 10mm depending on thickness.

Resurfaced areas were saw-cut with a 20mm blade along the transverse bay joints and filled with an N2 sealant. This was typically done two to three days after initial surfacing.

Separating the processes allowed for 12% tonnage improvement per shift, which delivered an approximate saving of £100k. Additionally this will maintain the pavement surface course for the full predicted life compared to 3-4years in high stress areas.

An additional benefit of working closely with the M25 Community offered the opportunity to trial various alternative solutions on the network;

Echelon Paving – two pavers side by side to remove joints in between lanes removing a potential point of failure.

ULTILAYER SAMI in upper pavement layers (a UK first). Adding a highly flexible, rut-resistant layer to absorb the expansion and contraction of underlying concrete. This resulted in no need for joint treatment, or saw/cut and seal, this reduced cost by 18% and reduced the number of shifts for additional treatments by 66%.

ULTIPAVE PMB – Uses a high content, high quality PMB to offer a flexible material which can move with the underlying material and offers flexible laying depths between 35-75mm. This was a trial based on 50% of the material being left whole and 50% being saw cut and sealed to provide a better understanding if the material has a greater resistance to reflective cracking than conventional CL942 PMB mixes. It is regarded as best practice to always saw cut and seal new asphalt surfacing that is laid straight on to concrete.