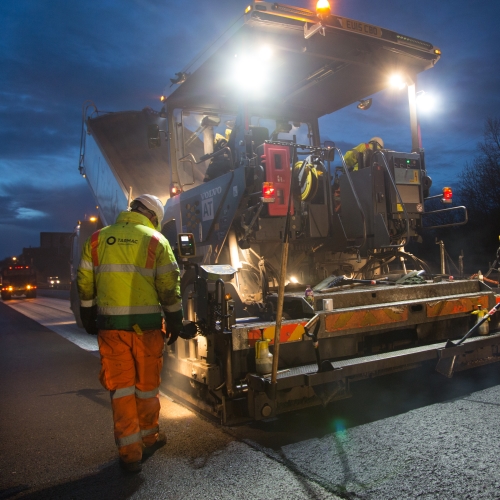 The A2 between Bean and the Bluewater Shopping & Leisure Complex in Kent is a busy stretch of carriageway used by over 130,000 drivers every day. Tarmac was commissioned by Highways England to undertake a deep inlay reconstruction of the carriageway in order to provide a safer and smoother journey for road users. Both Highways England and the Bluewater Shopping Centre management team wanted to minimise disruption to road users and avoid lost business for retailers. Originally the works were scheduled for completion during overnight road closures, however this would have meant completing just 70m of surfacing per shift and causing long term disruption for traffic.

After discussions with the client, Tarmac Contracting proposed an innovative approach that would reduce programme times and network disruption. Instead of completing the work during night shifts, the carriageway would be fully closed over the Easter weekend, when average traffic volumes would be lower. Using an ULTILOW warm mix binder course, supplied and laid at a lower temperature, allowed the carriageway to be resurfaced in two deeper layers rather than three layers as originally planned, which significantly reduced construction times.

As planned, all three lanes of this 1.1km stretch of carriageway were resurfaced with ULTILOW binder course (120mm thick) and 10mm ULTIPAVE M PSV 65 surface course (40mm thick). Over 2,500 tonnes of asphalt was laid in just 28 hours over the Easter weekend. This approach reduced the initial 53 day programme by 24 days and delivered a £400,000 cost saving for Highways England. Despite severe weather from ‘Storm Katie’ and time lost due to high initial traffic counts, the carriageway was handed over 3 hours earlier than anticipated. There was also a significant reduction in CO₂ emissions which helped to reduce the environmental impact of the project.

£400k in cost saving to Highway England and significant saving on carbon emissions.